Compelling messages have popped up during October in many surprising places from our parents and grandparents, who survived the 1935 man-made climate disaster called the “Dust Bowl”. Many important lessons can be found in their experiences to help those who face today’s climate crisis. 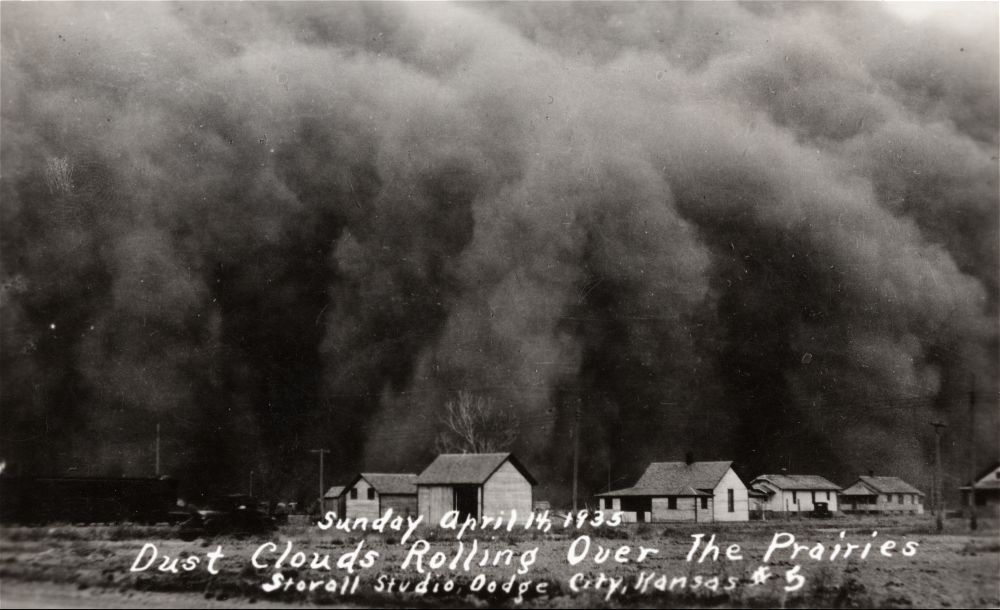 April 14, 1935 is known as Black Sunday. A dust storm darkened the sky from northern Canada to southern Texas. For those who want to learn historical details, this site has thorough research with lots of references … and photos:

Migration was one typical effect, as we have seen over and over when faced with climate disasters. Reaction to the onslaught of migrants was similar to what we have seen since 2016, except in the depression years of the 1930’s, there really, really were no jobs for anyone.

The defensive reaction of the states invaded is described in this article: http://www.todayifoundout.com/index.php/2014/08/los-angeles-bum-brigade/

The Los Angeles police chief at the time was James “Two-Gun” Davis. Beginning in November of 1935, he sent 136 LAPD officers to 16 different California entry points, ones that bordered Arizona, Oregon, and Nevada with orders to turn back any incomers with “no visible means of support.” It was a harsh way to deal with the crisis and one that was not legal.

“By December, these officers had become known as the ‘Bum Brigade.’ They were given specific orders to search all incoming cars, wagons, and trains. Those who had ‘no means of support,’ no train ticket, or were under suspicion for ‘vagrancy’ were told to either leave the state or face jail time. Many choose to turn around and leave.”

Personal Stories of the Dust Bowl

From my own family, we were surprised to discover this story told by Mildred Adams, who migrated to California in 1938.

“We locked up our house and business, left unpaid bills to creditors, and our home for sale. We packed up all our worldly possessions we could carry, and loaded up the car, our 1933 Chevy, including Joann’s crib. I was still wearing a steel brace from my back injury. I really did not want to leave Colorado Springs, but to save Marvin’s life, I consented.” – Mildred Adams. Read the whole story

Out of the Dust: Story of a family who stayed. Some interesting Dust Bowl stories have been written about the experience of children and teens in families who stayed in their farms and homes, and tried to survive. – Karen Hesse: Out of the Dust

The Cyclone Line music tells the story for a new generation

In this beautiful “play with music”, Kat Eggleston’s stories and songs carry a compelling message for the future, packaged in an emotional family drama that everyone can understand. The play is named for the telephone party line that connected several Oklahoma families together. When a storm started up, the neighbors would alert those further down the line that trouble was coming.

Keep your eyes open for a production of this play to come your way. So far it has only been performed on Vashon Island in Washington. Ask her to bring it to your area or to make a film of it for everyone to see and hear.

Here are three songs from the version first performed in November 2016, with Kat’s descriptions below:

“My father was born in Michigan in 1923. When his family moved back to their original home in Oklahoma five years later, dad met kids who had never seen rain. This song is a recounting of his attempts to describe rain and the difference it could make to the dry devastation of the dustbowl. “

“As a kid in the dustbowl, dad used his terrific imagination to color a world that had gone grey. Because of Tarzan and another favorite character in the Sunday comics, he loved to pretend that the landscape around his house was actually Africa. I picture him talking to his youngest sister, trying to bring a sense of adventure to her life. “

“In the Oklahoma dustbowl, the telephone was often called the cyclone line. It was a party line, stretched over the barbed wire fence, and the when cyclones or dust storms kicked up, the neighbors would all get on the line, their voices becoming ghostly and distant as more of them joined in. The image is a powerful one that I use to listen to the voices of the past and bring them forward to our lives today. “